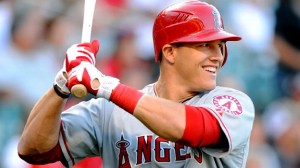 Mike Trout just turned 21 years old on August 7. He has given baseball fans plenty of gifts this season with an incredible rookie season, which has led to some speculation that he could win the American League MVP, along with the Rookie of the Year award. His season still has some time to play out, but his .345/.409/.597 line with 21 doubles, five triples, 21 home runs, 60 RBI, and a league leading 36 steals has already left the youngster with a 7.0 WAR. He already ranks among the greatest rookies ever and he could be on his way to becoming the best player in baseball very soon, if he isn’t already.

Looking at his incredible season led me to wonder who had the best rookie year ever. Here are my top ten rookie seasons since the Rookie of the Year was established in 1947:

Jackie Robinson gets the No.1 spot for more than just his results. Not only did he break the color barrier in MLB, but he posted these numbers with teammates that wouldn’t speak to him and opposing players and fans who slandered him on and off of the field.

Lynn led the Red Sox to the World Series in his rookie year and was the first rookie to win an MVP, as well. Lynn’s rookie season would have to rate as his second best season in his career, though he never won another MVP while making nine All-Star teams.

Ichiro was not your typical, young rookie, having arrived in the United States at the age of 27 from Japan. His speed and powerful arm in right field changed the Mariners for years. He would easily have 3,000 hits and would be closing in or beyond 4,000 hits for his career if he had played his whole career in the States, but 2,548 isn’t bad for now! The second Rookie of the Year to win the MVP, Ichiro led the Mariners to 116 wins in 2001 before they lost to the New York Yankees in the ALCS.

The future Hall of Famer came into the league with a bang. He immediately became a force to be wreckoned with in Cincinnati.

Pujols jumped from Low-A Peoria in 2000 to the majors in 2001. He hasn’t had to look back. Pujols has established himself as one of the greatest sluggers in the history of baseball. He struggled at the start of the 2012 season for his new club, the Los Angeles Angels, but he has his stats back to their typically mind-blowing status. He is a three-time MVP, and I may be selling his first season short at No.5.

If Braun wasn’t such an attrocious fielder in his rookie year, his WAR would have been much higher. He had an .895 fielding percentage at third base, which was just a touch lower than the league average of .954. Braun, juicing or not, has established himself as a superstar, and he will be in Milwaukee longer than the Miller Brewing Company with his current contract.

NOOOOOOOOOOOOOMAH!!! The man could fill up a box score in his rookie year, and he was a beloved figure in Boston due to his name being awesome to say with a Boston accent, and his ability. He came into the league around the same time as Alex Rodriguez, Derek Jeter, and Miguel Tejada, and Barry Larkin’s 1995 MVP season made the shortstop position a sexy offensive position. Together with Cal Ripken and the others, Nomar helped change the shortstop position, and his rookie year was statistically magical.

Piazza was selected by the Dodgers as a favor to Tommy LaSorda, his godfather. Sometimes, lightening strikes. Piazza was one of the greatest hitting catchers of all time. His rookie season was outstanding and the 62nd round pick only made 11 All-Star games. Nice find. Great season.

Before the reporters snooped into his locker and before McGwire and Sammy Sosa made baseball cool again after the 1994 player’s strike, “Big Mac” was a skinny, 23-year-old who hit 49 bombs in his rookie year. It is scary to think of the numbers he would have finished with if he wasn’t hurt so often during his career, playing in 1874 games over 16 years (117 games played per year).

Fernando-mania! The hefty-lefty took the baseball world by storm in 1981, winning the NL Rookie of the Year and the Cy Young. Eight SHUTOUT! 11 COMPLETE GAMES! Was Dusty Baker the manager of the Dodgers then!? The good ol’ days, where innings and pitch counts were just as overlooked as amphetamene use. Good stuff.

Where do you think Trout ranks among the greatest rookie seasons ever? Share your thoughts on the poll!

2 thoughts on “Greatest Rookie Ever?”